Oasis of colour and hope in Antwerp working-class district

Each week, more than a thousand young people visit the Urban Center in the Antwerp district ‘t Kiel. The building had been neglected for years. But now it is the beating heart of the working-class and multi-cultural district, thanks to the interior designers of Out Of Office. With a minimum budget they were able to turn the open space into an exceptionally dynamic and colourful whole.

This article comes from our magazine Nook. AiNB members receive this magazine for free. Non-members can order a subscription to Nook here.

“Wow”, exclaims a blond girl of eight as she pushes open the swing door of the Urban Center. “I want to come and dance here.” In front of her is 1000 m2 of open space, painted in bright colours. Light enters the building on the left and right through large, tall windows and shines on the red floor. The ceiling is coloured blue and the walls mint green, bright yellow and red. Right at the back there is a large stage. It is a black area surrounded by blue.

The “wow” is exactly what the people of Out Of Office had in mind when they set to work on the building’s interior. “We wanted to surprise the visitor”, explains founder and director Anouk van Oordt of Out Of Office as she gives a guided tour of the building. “Our assignment was both simple and complex: create a space that inspires and excites the visitors, but there is no budget.”

They weren’t lying when they said no budget. The Urban Center is home to Let’s Go Urban, an organisation that challenges young people to take control of their own lives. After school, they can come to the Urban Center and take dance and singing lessons,

become proficient in various other urban disciplines, receive tutoring and ask advice. At the helm is entrepreneur Sihame El Kaouakibi, who handily uses her contacts to give the young people as many opportunities as possible, but always has more plans than money.

“I got to know Sihame during a trip to Portugal with 72hours reload”, explains van Oordt. When Sihame told her story, I didn’t hesitate for a second and suggested designing and fitting out the Urban Center pro bono. The first time I saw the building, I immediately fell under its spell.

The combination of the space, the light and the old structure was exceptional. Back in Brussels, the team set to work intuitively with the primary colours of red, blue and yellow and we made a number of drawings. 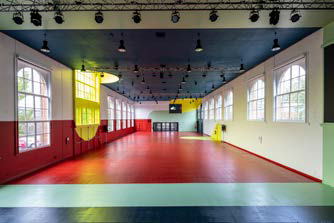 Out Of Office has developed its own way of working, explains van Oordt. “We always work in a team with co-workers with different backgrounds: think of designers, architects and communication specialists. Generally I start up the project with my team. After an initial design, I pass it on to the next team without giving much explanation. The advantage is that they can translate it into the next stage with a fresh and open mind and come up with unexpected creative solutions.”

A striking feature is the recess in the ceiling halfway along the hall near one of the large windows on the right-hand side of the building. Out Of Office painted the round recess yellow, together with the window frames and the wall around the window, as well as a half circle under the window. The windows themselves were covered with a yellow foil. The result is a very powerful yellow accent. The half circle in the ceiling seems to be mirrored under the window. And the light that falls through the window spreads a yellow glow on the red floor. 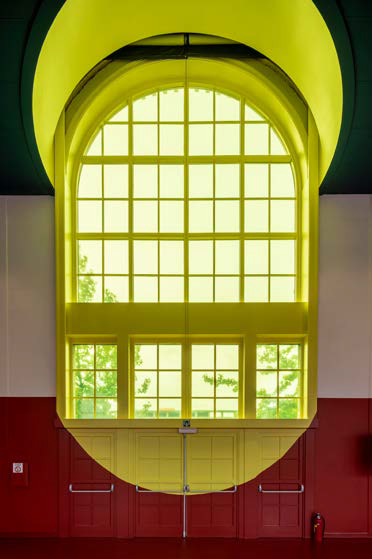 Directly opposite the window is an emergency exit. This too is painted in the same yellow with a triangle adhered to it on the wall and a half circle on the floor in which you can recognise the shape of the window above the emergency exit. It is as if a yellow ray of light shines through the window and is reflected on the ground.

Striking red, mint green and blue accents have been applied in other places. The stage is a black box that, when correctly lit, attracts the full attention of the audience. “At Out Of Office it is all about intuition and energy and the interaction between shapes, colours and dimensions”, continues van Oordt. “The yellow area above the swing doors used to be smaller. We enlarged it later. Why? I can’t explain. We polish and shift things around until it feels right. It is like a work of art. It is difficult to retrace how it came into being. You look at the forces in the building and then emphasise them with the right colours.” 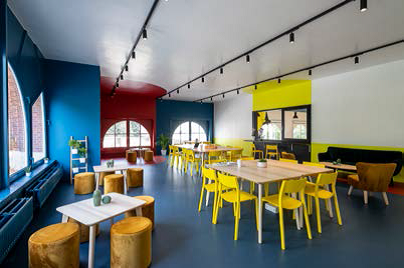 The Urban Center was built in 1912 by the Antwerp-based architect Emiel Van Averbeke who initially designed in the Art Nouveau style but was later inspired by the rationalism, following the example of the wellknown Dutch architect Hendrik Berlage. For many years, the Urban Center was an Orangery until, in the fifties, it was converted into a multi-purpose event hall where parties and jumble sales were held.

A few years ago, Sihame El Kaouakibi was able to convince the city of Antwerp, which owns the building, to loan the building to Let's Go Urban on condition that the latter would renovate it. “The building desperately needed a facelift”, explains El Kaouakibi. “The existing structures, such as the roof, needed replacing. Many old elements had been destroyed. On one side, the windows had been bricked up to block the noise from the street. We installed new windows throughout, rewired the electricity, reinforced the stage and restored everything as far as possible to its original state.”

In total, the renovation cost 800,000 euros and was paid partly by the city of Antwerp and partly by Let’s Go Urban. The first stage of reconstruction took five months. In September 2018, the Urban Center was officially opened with a big party.

Light structure of glass and concrete

The Urban Center is an oasis of colour and hope in the poor working-class neighbourhood of 't Kiel, to the south of Antwerp's city centre. ‘t Kiel has several beautiful buildings designed by architect Renaat Braem in the post-war years. But there are also many small and badly maintained workers' homes. The imposing colour scheme also caught the eye of the jury for the Frame Awards. In 2018, they nominated the Urban Center in the category ‘Best use of colours’.

The idea was to let out the Urban Center to third parties in order to defray the operating costs. But that hasn’t been very successful. The aim is to change this next year. The new building next to the Urban Center must be ready by then. According to El Kaouakibi, this building will have a completely different feel about it.

“It is a light structure of concrete and glass. Very sober and simple with various small rooms for dance and music studios. There will also be a café run by the young people themselves where people from the neighbourhood can meet or work.”

If everything goes according to plan, the new building will open its door in February 2020 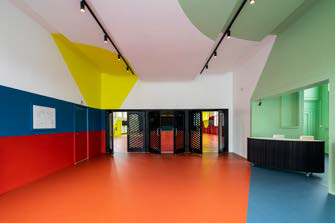 - MET PLAIZIER OF OUT OF OFFICE -

Some companies frame their standards and values and hang them on the wall. Out Of Office thinks up concepts for their clients which makes that superfluous. The concepts bring the standards and values to life, both in design and behaviour. At the same time, Anouk van Oordt's company is strongly committed to stimulating entrepreneurship among children and open innovation in the business community. “We want to build a bridge between the business community, the government and schools.” Part of the new office of Out Of Office in Ukkel near Brussels has been freed up for Met Plaisier, a co-home working space. “We want local residents, children and people from the business community to come here and work together. The intention is to create a brand with Met Plaizier and roll out the concept in different places.” www.weareooo.be 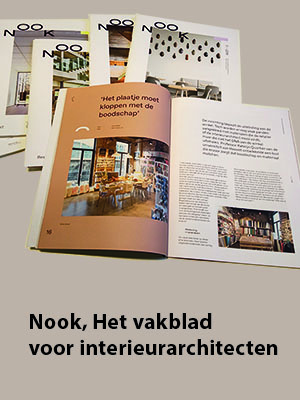 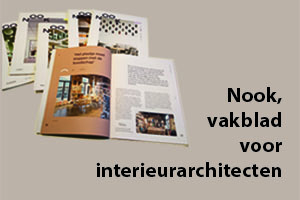